Toxic hospital food: the disconnect between diet and disease

If you ever get to experience a hospitalization then get ready for trays full of processed food. Hospital food exemplifies one of the key institutional problems in American medicine: ignorance or sometimes complete disregard for the importance of diet in favor of pharmaceuticals and intensive procedures.

I work in a hospital and I once saw a patient with advanced type II diabetes and resulting kidney failure eating Fruit Loops. By hospital standards this was okay since he was within his carbohydrate limit for that meal.

I understand the drill in the hospital. It’s just fine to allow diabetic patients to eat unhealthy processed carbohydrates and sugary foods. The thinking goes something like this: “We’ll just even things out with an injection of insulin.”

I see cardiac and diabetic patients eat cereals, fat-free yogurts and puddings full of added sugar, white bread, pastas, and syrupy fruit cocktails and juice sweetened with high fructose corn syrup. Ensure anyone? Some of the Ensure formulations I’ve seen given to patients have more sugar in them than a Coca Cola. 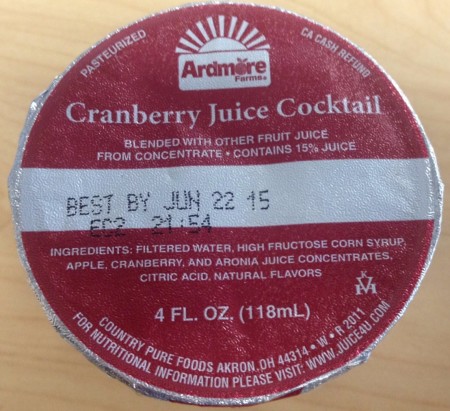 One could say that hospital stays usually only last a few days, so it doesn’t matter too much that patients eat these foods for a short time. I disagree because I think the message “eat what you want and manage the outcome with drugs” goes home with the patient.

I have to ask, does the medical establishment truly know enough about properly managing chronic diseases like type II diabetes and heart disease?

Doctors seem to think they do. I’ll never forget the time I was in a room with a patient who had coronary artery blockages. A team of cardiac surgeons came in to speak with her about what would happen next. The head surgeon smiled and told her, “Well we’re going to do some plumbing work here. I think a triple bypass should do it, and everything is going to be just fine.”

It’s not just that pharmaceuticals and procedures are pushed as a first line of treatment over food as medicine because they are profitable. Treating chronic diseases in this way is an institutional, or what I like to call frat boy, problem.

You’re the quack doctor if you’re trying to go against the grain of using pharmaceuticals to treat patients; you’re looked at like an outcast brother in a cliche. Drugs and surgeries can fix everything. Drugs are the sophisticated way to deal with disease, not nutrition. That’s not real medicine.

The doctors did make a comment to her about how she needed to better control her type II diabetes. In medicine it is well understood that type II is intricately linked with heart disease.

I once wrote that pre-diabetes and type II diabetes are on a continuum. They are the result of the same problem — insulin resistance. Actually, the entire continuum goes like this: insulin resistance and undetected impairment in metabolizing glucose, detectable impairment in glucose metabolism or pre-diabetes, type II diabetes, and serious heart disease. Although heart disease doesn’t come last, it develops [sic] as problems in metabolizing carbohydrates worsen.

Sure there are other causes of heart disease, but for the most part, it is due to diets heavy in processed carbohydrates and sugar that cause systemic inflammation, and impair glucose metabolism which directly impairs fat metabolism.

In any case, none of this was explained to the patient. They could have taken just a minute to explain the connection and why it was so important she get her diabetes under control through what she eats.

Instead they handed her a slip of paper that looked like an artifact from the 1970s. It was the “cardiac diet.” I like to call it the “I’ll be back for another bypass soon diet.” Of course vegetables and fruits are mentioned, but only fat-free foods—often times compensated with loads of sugar for lack of taste—were allowed, and high glycemic processed whole grains like whole wheat bread and pasta were encouraged. These are the very foods that cause type II diabetes and heart disease to develop and worsen.

It’s also the same nonsense purported by the U.S. Department of Agriculture — based off of insufficient scientific findings about dietary fats from the 1950s — and subsequently the American Diabetes Association and other health organizations.

The suggestion has been to eat carbohydrate dominant diets —  reduced fat/fat-free foods and whole grains, with messages like: “Look for packages that say 100% whole grain.”

Grains have high glycemic indexes. Whole wheat has one of the highest glycemic indexes and is not healthy for diabetics. In fact, people who have poor glucose tolerance don’t even need to eat grain at all.

There is nothing whole about a formerly whole kernel that has been milled down. Eating it in processed and packaged forms is just as bad for blood sugar levels as eating white flour.

The disconnect between nutrition and health is widespread in the medical field, not just in hospitals.

My doctor had robotically prescribed metformin and I received no nutritional counseling whatsoever. I learned what to do and where I was going wrong by reading a ton of research and taking courses in Biochemistry and Endocrinology.

Now I could march back into his office and say, “That gut you have is an accumulation of dangerous visceral fat around your organs. That’s a sugar belly, a wheat belly, a carb belly, and that’s why your triglycerides are too high.”

He also didn’t tell me that metformin interferes with the absorption of vitamin B-12. I found this out myself after becoming deficient.

Obviously there’s also disconnect on the patient’s side too, not just the medical profession’s. With all the pharmaceutical advertising and the “ask your doctor…” taglines, it’s not a wonder that we Americans have become so dependent on drugs. It’s ingrained in many of us that medications are the noblest solution to our ills; that something more advanced than a simple lifestyle change is the solution.

I applaud the doctors who are working to normalize the use of dietary interventions for health, but these doctors are few and far between.

Here is an example of a doctor, Sarah Hallberg, who knows what she’s talking about. She gives a short, enthusiastic, and easy to digest presentation:

Dr. Hallberg doesn’t talk about drugs. In fact she makes the point that she’s helped people who have been taking drugs for type II diabetes for many years come off them, and she criticizes the American Diabetes Association for not setting any goals for reversing type II diabetes.

“Low carb interventions work so fast,” she says, “that we can literally pull patients off of hundreds of units of insulin, in days to weeks…my patients eat fat and a lot of it. Fat is the only macronutrient that is going to keep our blood sugar and insulin levels low.”

I understand that not every patient is going to listen to nutritional advice anyway, and that they’ll prefer to eat what they want and take medications, though medications will never substitute for a healthy diet [sic] (thus, the existence of the medical industry’s billion dollar business). Dietary changes can reverse many chronic illnesses, while medications and procedures merely manage the symptoms and complications.

When it comes to internal illnesses, I am one of those people who believes that nutrition is the cure for all ills. Which is of course quackery in the medical industrial complex world. However, I also believe there are of course situations when medication and modern interventions are necessary when there’s physical trauma involved.

Also See Are You Toxic?

Genetically modified salmon OK’d for human consumption in US

In this photo taken Sept. 20, 2010. AquaBounty CEO Ron Stotish, the company that applied with the Food and Drug Administration (FDA) to market genetically modified salmon, speaks to reporters in Rockville, Md. The FDA on Thursday approved genetically modified salmon, the first such altered animal allowed for human consumption in the United States. AquAdvantage Salmon was created Massachusetts-based AquaBounty. Stotish said in a statement that the fish is a “game changer that brings healthy and nutritious food to consumers in an environmentally responsible manner without damaging the ocean and other marine habitats.” (AP Photo/Charles Dharapak)